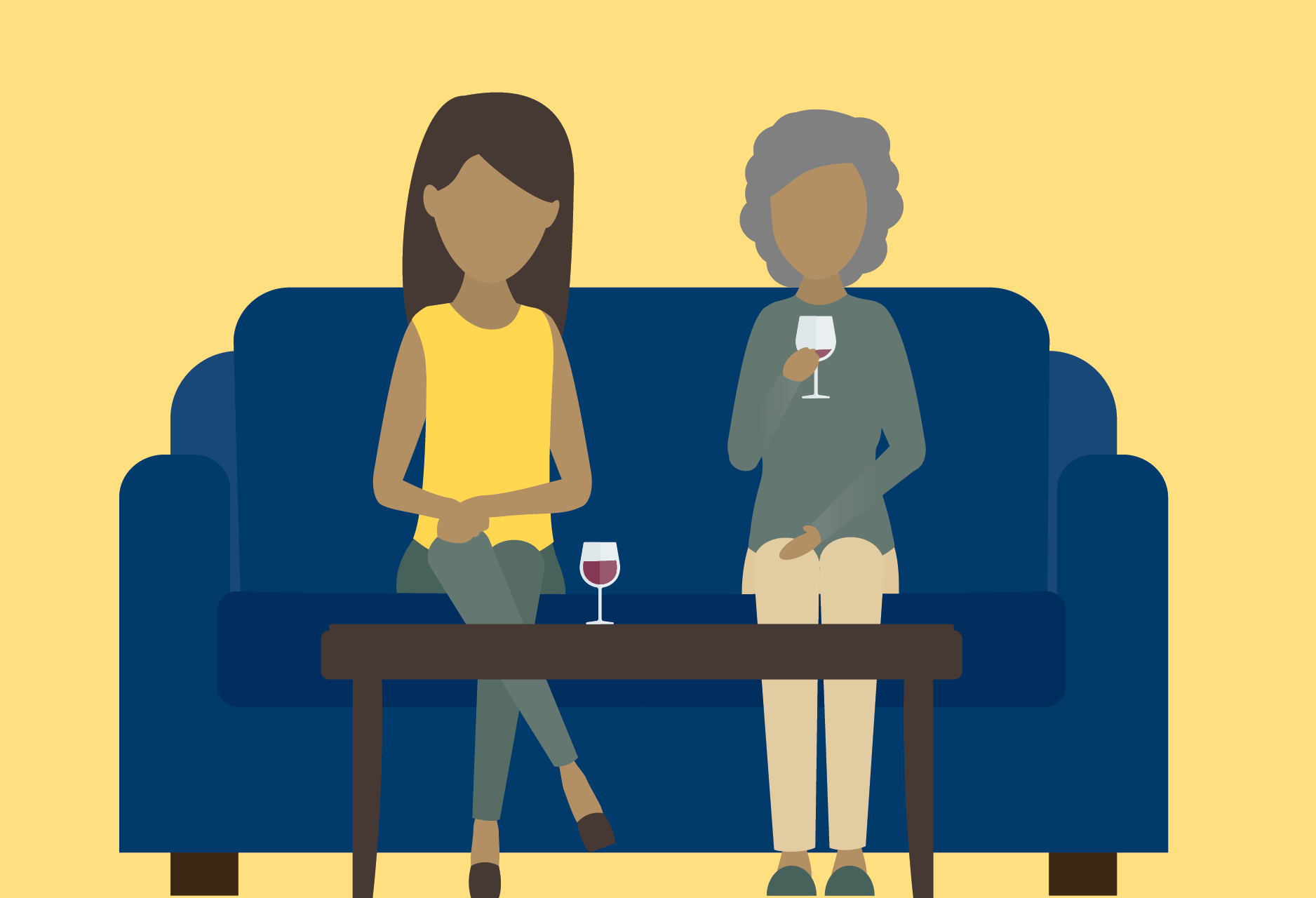 While drinking alcohol is a source of enjoyment for many older adults, it can also pose health risks. These risks include memory loss, injuries, and potentially harmful interactions with commonly prescribed medications, even at low levels of alcohol consumption. In January 2021, the University of Michigan National Poll on Healthy Aging asked a national sample of adults age 50–80 about their alcohol use and reasons for drinking.

Alcohol use among older adults

Two in three adults age 50–80 (67%) reported drinking alcohol at least occasionally in the past year. Among those who drank, 42% drank monthly or less often, 19% two to four times per month, 18% two to three times per week, and 20% four or more times per week. On a typical day of drinking, the majority (77%) consumed one to two drinks, 17% had three to four drinks, and 6% had five or more drinks.

Men were more likely than women to report any drinking in the past year (73% vs. 61%). Men were also more likely to report a higher daily quantity of alcohol use. One in five men age 50–80 (20%) reported having three to four drinks containing alcohol on a typical day of drinking compared to 15% of women, and men were twice as likely to report five or more drinks on a typical day of drinking (8% vs. 4%).

Among adults age 50–80 who drank alcohol, one in four (27%) reported having six or more drinks on at least one occasion in the past year, and 7% said that alcohol had ever made it difficult for them to remember parts of the day or night (i.e., alcohol use led to a “blackout”).

Use of alcohol with other drugs 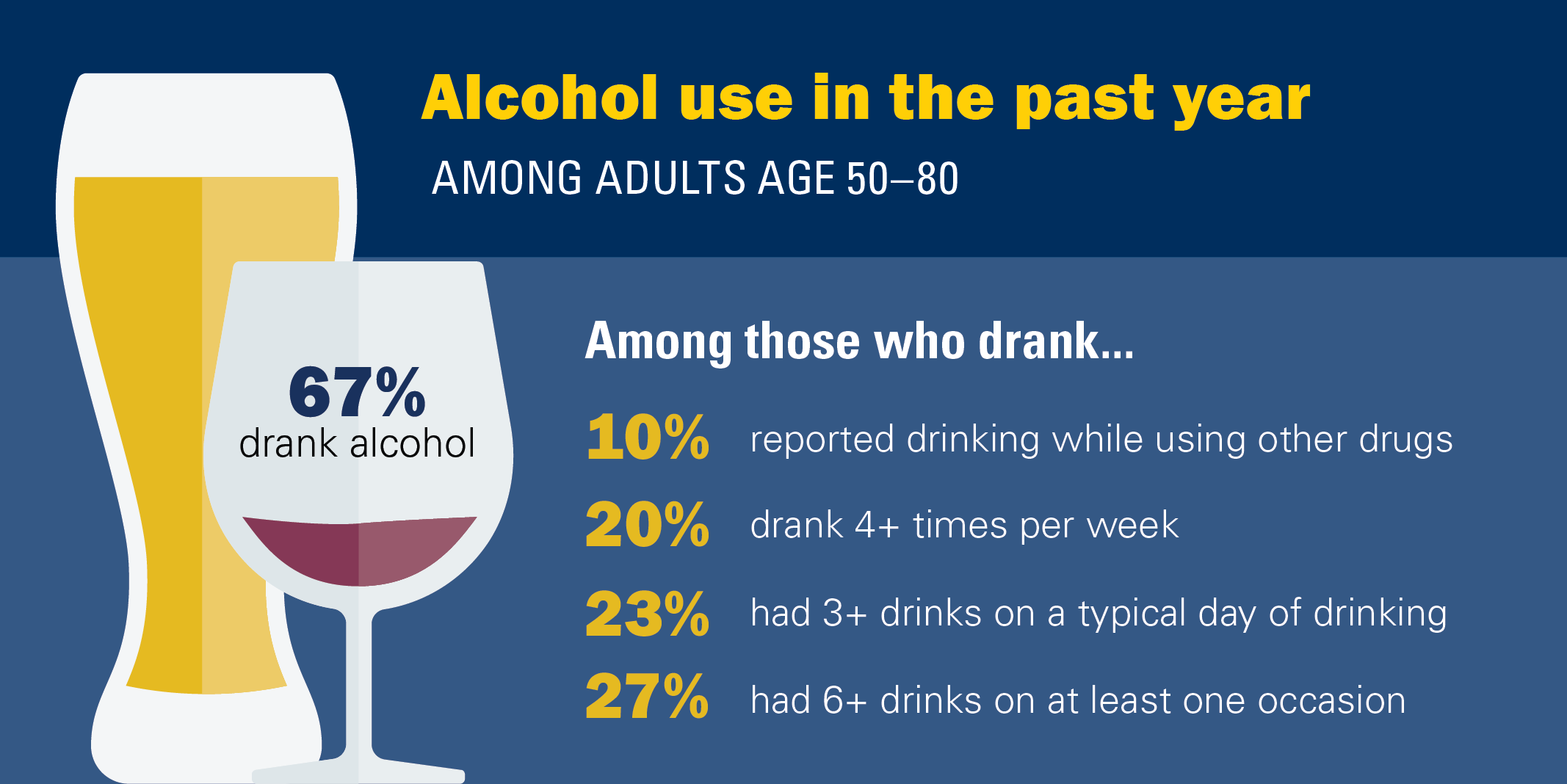 Treatment for alcohol use

Use of alcohol during the COVID-19 pandemic

This poll showed that the majority of older adults do not drink alcohol or drink at low to moderate levels defined by federal guidelines for adults of legal drinking age as two drinks or less in a day for men and one drink or less in a day for women. However, some adults age 50–80 reported more risky alcohol use. For example, 23% reported drinking three or more drinks on a typical day of drinking, and one in ten older adults who drink have combined alcohol with other drugs. Exceeding guidelines for moderate drinking and combining alcohol with other drugs increases older adults’ risk of adverse health and social consequences. Some older adults, depending on their health conditions and medications, may experience health consequences at lower levels of alcohol use. Yet, few older adults reported having concerns about their current alcohol use or have sought help for alcohol problems.

Aging affects how the body responds to alcohol and other substances and specifically increases the brain’s sensitivity to the effects of alcohol and drugs. This can mean that drinking at levels older adults did when they were younger can now pose more substantial health risks. Older adults who choose to drink should speak with their health care providers about safe levels of alcohol use and discuss the possible adverse effects from combining alcohol and medications. Combining alcohol with certain medications such as opioids can be particularly dangerous.

Health professionals who care for older adults should routinely ask about alcohol use using short evidence-based questionnaires. Brief interventions can be used during medical visits to address concerns with alcohol use. These interventions should emphasize education on how the health risks of alcohol use change as people age. Health professionals should also routinely ask older adults about whether they use any other drugs when drinking alcohol and counsel them about the risks of combining alcohol with other drugs.

For older adults who would like help with cutting down on their alcohol use, or stopping drinking altogether, proven strategies and treatments can help them achieve these goals. Some older adults could benefit from referrals to alcohol treatment programs but may require support to access these services.

Families can also play an important role in addressing alcohol use among older adults. Loved ones should be aware that alcohol use may be associated with an increased risk of health and other problems and can encourage older adults to seek help, if needed.

For those who choose to drink alcohol, ensuring that alcohol consumption stays within safe levels can contribute to overall health and well-being.