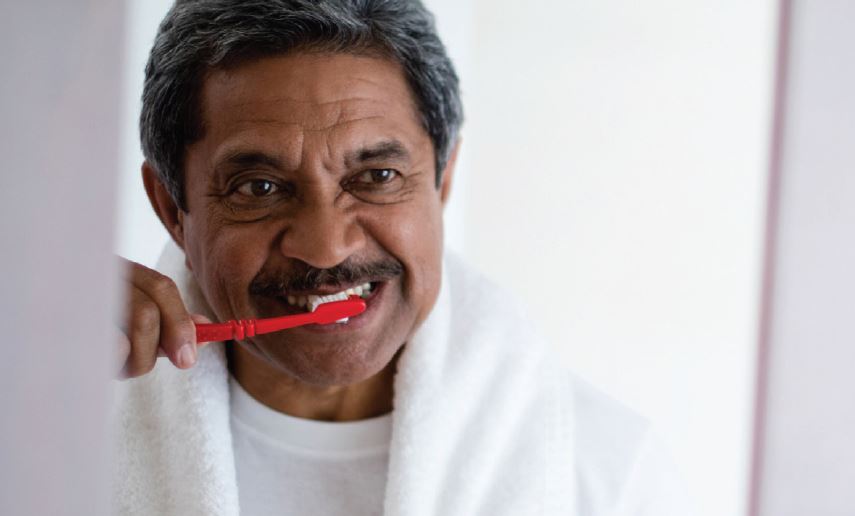 Keeping teeth healthy involves a combination of good oral hygiene (e.g., brushing and flossing) and routine preventive dental care (e.g., professional cleaning) with prompt attention to dental problems before they become severe. While researchers have studied oral health and dental care utilization among those over age 65, less is known about the 50–64 age group and their approach to dental care. The University of Michigan National Poll on Healthy Aging asked a national sample of adults age 50–64 about their oral health and experiences with dental care and insurance.

In reporting how often they get dental care, 60% of poll respondents were prevention-focused, with regular dental cleanings and problem care as needed, 17% had inconsistent prevention, with occasional dental cleanings and problem care as needed, and 23% were problem-only, getting care only for serious dental problems, if at all. Respondents who were women, White, had higher income, or had dental insurance were more likely to be prevention-focused, while those who were men, Black, Hispanic, from lower income households, or lacked dental insurance were more often problem-only in their dental care.

Use of Dental Care 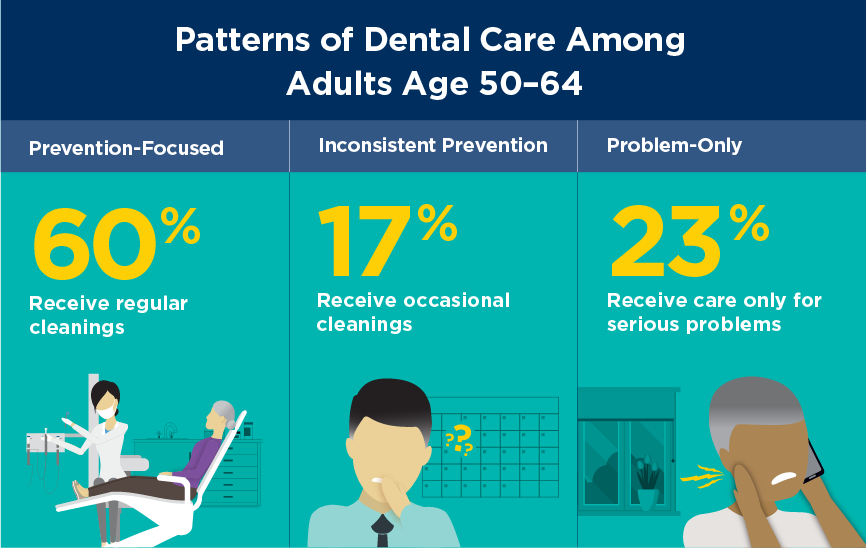 Dental Insurance: Now and in Future

Overall, 28% of respondents indicated they did not currently have dental insurance. Among those without dental insurance, 33% were prevention-focused while 47% were problem-only.

Patterns of dental care differ substantially among adults age 50–64. Those who receive consistent preventive dental care often have more resources for accessing care (e.g., dental insurance, higher income, a regular dentist) than those with inconsistent or no preventive care. The results also suggest a gender gap as well as economic and racial disparities in the approach to obtaining dental care.

Overall, one in three respondents noted that they are embarrassed about the condition of their teeth. A similar percentage reported that they have experienced dental pain or problems in the past two years. These findings are concerning given that the condition of one’s teeth can impact self-esteem, social relationships, job seeking and retention, ability to maintain good nutrition, and overall health.

The majority of those with problem-only care did not deny the importance of preventive dental care, but rather they reported more barriers to getting care. While the majority of respondents indicated it is definitely or somewhat true that dental care is as easy to get as medical care, the percentage was lower among those who were problem-only as well as those without dental insurance.

Not getting dental care can lead to further oral health or other health problems. Among those reporting unmet dental needs in the past two years, cost was the predominant factor. Beyond cost, a considerable number of respondents reported fear of the dentist as a major reason for unmet dental needs. This can become a vicious cycle: fear of the dentist delays care; delaying care allows a problem to progress; and when care finally is sought, the treatment can be extensive and painful.

Other respondents reported foregoing dental care for more mundane reasons, including not being able to find time to go. Working adults may have difficulty getting an appointment during non-work hours. In some areas, simply finding a dentist can be a challenge because there are not enough providers.

Although dental insurance generally does not cover the full cost of care, particularly for complex procedures such as root canals and crowns, those with dental insurance were more likely to report being prevention-focused with their dental care. All adults—especially those who currently have dental insurance—should be encouraged to seek regular dental care, as many may lose coverage in the future when they become eligible for Medicare.

Poll respondents’ apparent lack of knowledge about their future dental coverage is another area of concern, especially given the strong connection between dental insurance and utilization even when other cost barriers remain. While about one in four respondents expect to have dental insurance through an employer-sponsored or supplemental dental plan, one in eight believe that basic Medicare or Medicaid will cover their dental care. Yet traditional Medicare does not cover dental care, and many states offer very limited or no dental coverage to adults with Medicaid.

Half of all respondents, and a similar percentage of those who currently have dental insurance, don’t know how they will get dental insurance when they turn 65, which may mean that even those who are currently prevention-focused may face additional barriers to maintaining their oral health as they age.

This report is based on responses from 1,066 respondents age 50–64. The completion rate was 75% among panel members contacted to participate. The margin of error is ±1 to 3 percentage points and higher among subgroups.