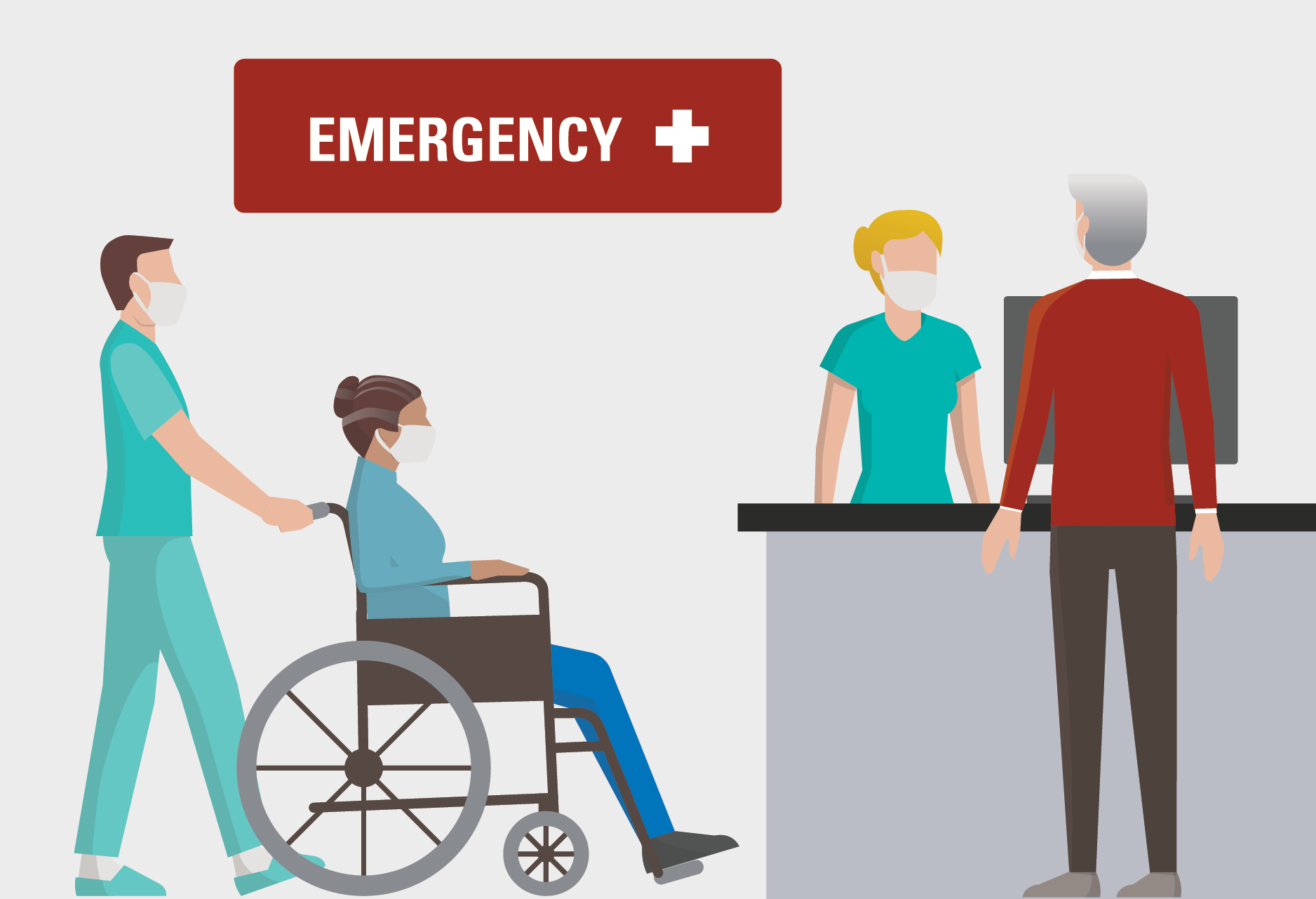 Each year in the United States, adults age 50 years and older make more than 40 million visits to an emergency department (ED, also referred to as ER). Older adults often have complex needs and, as a result, their ED visits may require greater coordination between multiple health care providers and more follow-up services. In June 2020, the University of Michigan National Poll on Healthy Aging surveyed a national sample of adults age 50-80 about their experiences with ED visits. 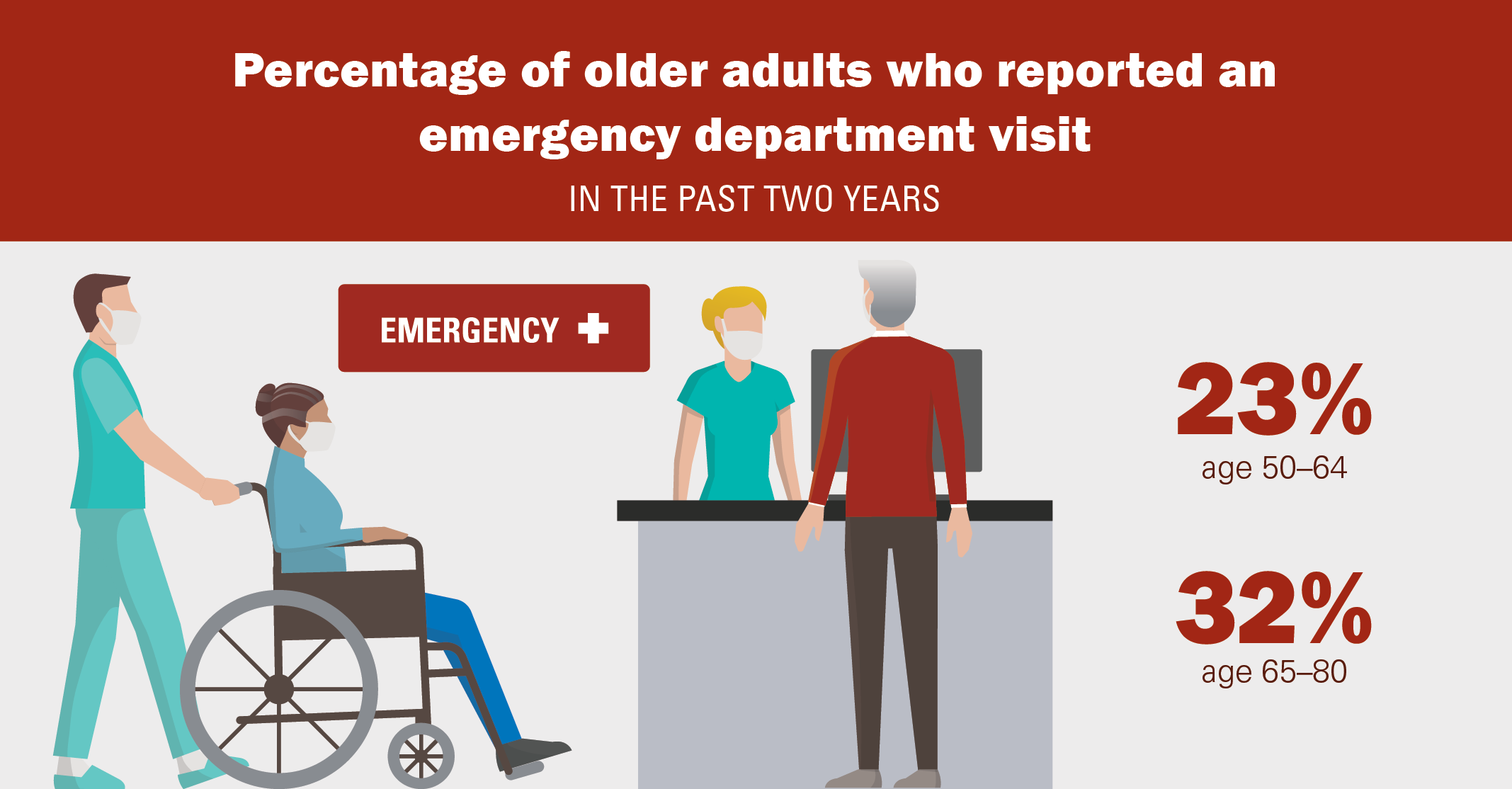 When deciding whether to go to the ED, most adults age 50–80 reported that they would be concerned about wait times (91%), exposure to COVID-19 (86%), out-of-pocket costs (79%), and being admitted to the hospital (77%). More than one in three (37%) said they would be concerned about transportation home. Nearly two in three older adults (63%) said they would first ask their health care provider or office staff before going to the ED.

When considering where to go for ED care, older adults reported that their insurance coverage (86%), the reputation of the ED (69%), location (68%), and a recommendation by a health care provider (61%) were very important factors.

Most older adults with an ED visit indicated that the amount they were involved in decision-making about testing and the plan of care was about right (85%). The majority also reported that the ED team sufficiently involved their family, friends, or caregivers (84% among those with family or friends present).

Seven in ten older adults (71%) were discharged (not admitted to the hospital) following their most recent ED visit. Of those, many reported receiving recommendations for post-ED care, including: following up with a primary care doctor (84%), filling a prescription for medication (69%), following up with a specialist (60%), obtaining additional laboratory (56%) or radiology (49%) testing, and receiving home care services (29%). The majority said they were able to follow up as instructed by the ED team after discharge and saw their primary care doctor (88%), filled prescriptions (97%), obtained recommended laboratory (70%) or radiology (66%) tests, or followed up with a specialist (67%). Fewer (23%) reported that they received the home care services that were recommended to them.

Most older adults (86%) agreed that it is important to discuss their advance directives with the health care team during an ED visit. More than half (54%) said they were concerned that if they were to become seriously ill, the ED care they might receive would not be consistent with their wishes. This level of concern was significantly higher among Hispanic (69%) and Black (61%) older adults compared to White (49%) older adults.

In the past two years, 7% of older adults reported that they did not go to the ED when they thought they needed to due to concerns about their out-of-pocket costs. Individuals who were age 50–64, were women, had lower household income, or were in fair or poor mental or physical health were more likely to avoid ED care due to cost concerns.

Nearly one in five older adults (18%) were not confident about being able to afford out-of-pocket costs for a future ED visit (see supplemental data table in report pdf).

Emergency departments are a unique part of the health care system: they are always open, do not require an appointment, and treat everyone regardless of ability to pay. This poll found that nearly one in four adults age 50–64 and almost one in three adults age 65–80 had received care in an ED in the past two years.

The vast majority of those who had an ED visit in the past two years reported satisfaction with communication around their treatment and discharge care plan and felt that they and their family members were sufficiently involved in making decisions about their care. After the ED visit, while many adults age 50–80 reported being able to obtain recommended follow-up services, some reported challenges in accessing post-ED care, particularly home care services.

Notably, this poll identified high levels of concern about the cost of ED care among older adults, especially among those age 50–64 or with incomes below $60,000. A small but significant portion of older adults cited cost concerns as a reason they avoided going to the ED, even in cases when they thought they needed emergency care.

In addition to costs, older adults also considered other factors when deciding whether to go to the ED, including wait times and possible exposure to COVID-19. It is necessary to recognize the new concerns about seeking care in the ED that have emerged as a result of the pandemic.

The results of this poll could help hospitals, emergency and other health care providers, and insurers improve the ways they advise older adults on seeking emergency care, treat them once they arrive at the ED, address their cost-related concerns, and assist them in receiving follow-up care.