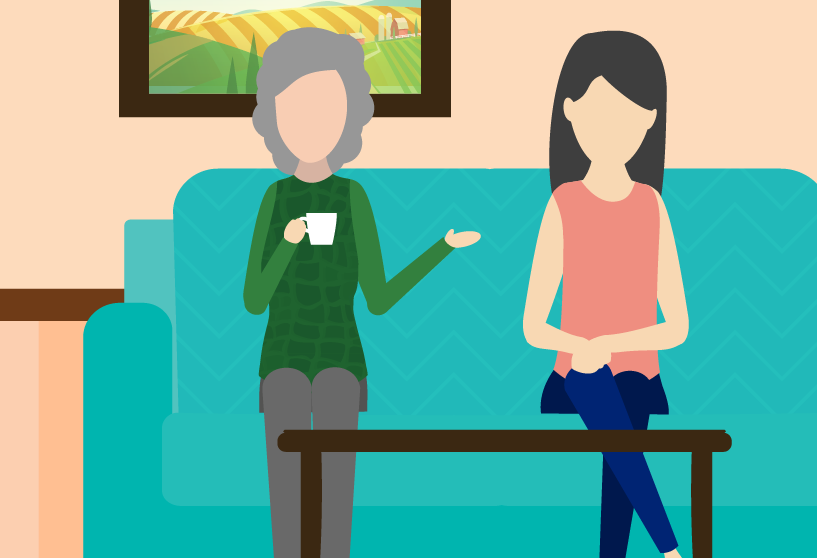 Older adults had varying levels of support for different strategies to promote flu vaccination among staff of nursing homes. The strongest support was for providing flu vaccine to staff for free, onsite at the facility (93% support). Most respondents said they would support a policy to not allow unvaccinated staff to come to work if they were sick (82% support). There was less support for mandating that all staff get flu vaccine in order to keep their job (55% support) or giving bonus pay to staff who get flu vaccine (47% support).

Given a scenario where 1 in 3 staff at a nursing home do not get flu vaccine, 40% of respondents said that this information would make them much less likely to choose that facility for themselves or a family member, while 30% said the information would make them slightly less likely to choose the facility; 30% said it would not affect their decision. 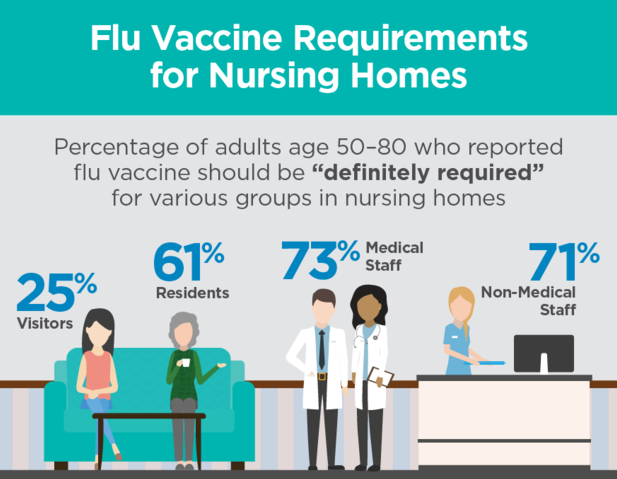 With many vulnerable persons living in close proximity, nursing homes are common settings for the spread of influenza. Annual flu vaccination is recommended to protect individuals, as well as prevent an outbreak of influenza. Flu vaccine requirements for healthcare workers have become commonplace in many acute care hospitals, and vaccination rates are tracked for health care facilities that serve the Medicare population. In contrast, flu vaccine requirements are less common in nursing homes.

Results of this poll indicate strong support for policies that would require flu vaccination for medical staff in nursing homes. Such requirements would protect residents, and protect the medical staff themselves.

There also was strong support for requiring flu vaccination for non-medical staff in nursing homes. A broad staff requirement that includes both medical and non-medical personnel may reflect the reality that nursing home residents have consistent contact with food service, housekeeping, maintenance and other staff.

To encourage vaccination among staff at nursing homes, nearly all respondents to this poll strongly supported efforts to make the flu vaccine free to staff and available onsite — thereby eliminating logistical barriers to vaccination. Nearly half of respondents supported direct incentives, like giving bonus pay to staff who get vaccinated.

Respondents were nuanced in how a flu vaccine requirement might impact staff employment. Although 82% of respondents would endorse a policy to not allow unvaccinated staff to come to work if they were sick, only 54% would support a mandate that all staff get flu vaccine in order to keep their job. This finding suggests that respondents understand the risk of an unvaccinated staff member to the vulnerable nursing home population, but are not quite comfortable with the concept that someone who chooses not to be vaccinated should lose their job.

Four in ten respondents to this poll indicated that information about low levels of flu vaccination among staff would make them much less likely to choose a particular nursing home facility for themselves or a family member. Typically, information about the flu vaccination rate for a particular nursing home is not publicly available. However, given the potential risk of influenza transmission, this may be an area of inquiry for those who are considering different facilities.

Low level of support for requiring visitors to have flu vaccine may reflect difficult logistics. For example, it may be hard to convey the information to all friends and family members, especially those who may visit occasionally or unexpectedly. This type of policy might interfere with residents’ ability to see family and friends. In addition, this type of requirement would be difficult to enforce. Individuals who expect to visit a friend or family member in a nursing home or assisted living facility should make a point of getting annual flu vaccination at least two weeks before visiting, to protect themselves as well as residents. 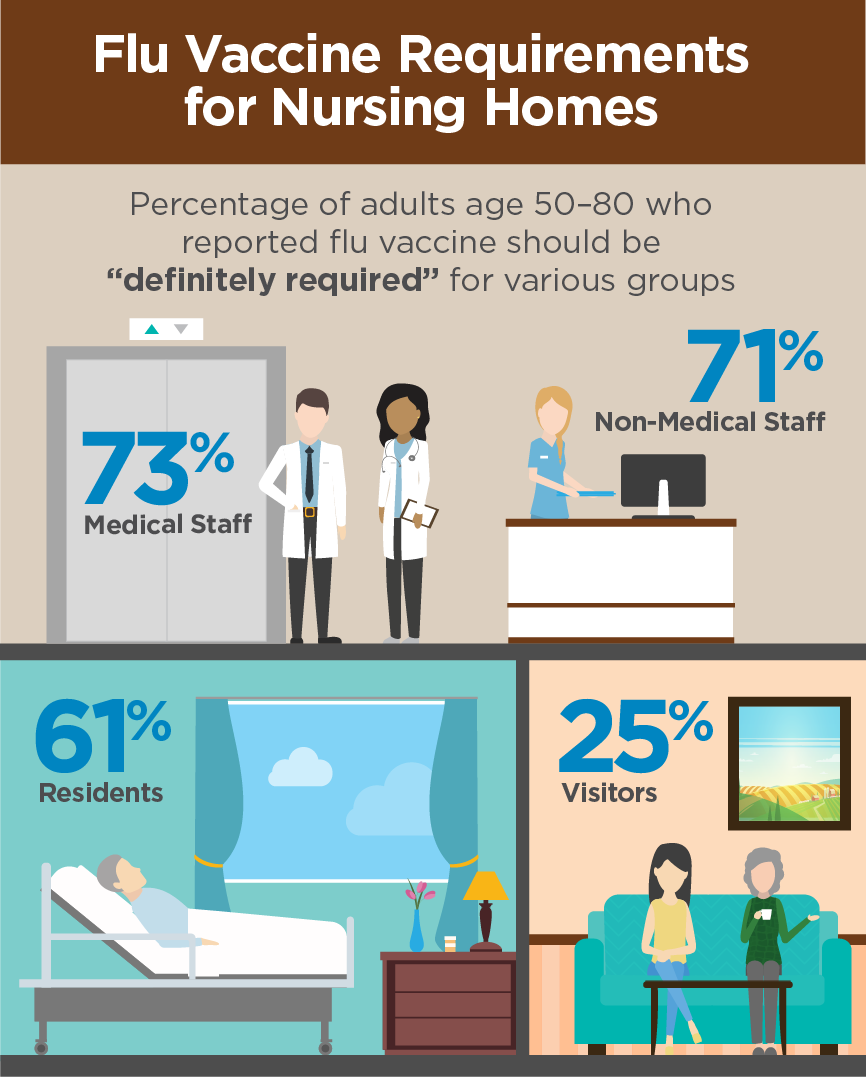 This survey was administered online in October 2017 to a randomly selected, stratified group of older adults age 50–80 (n=2007). Respondents were selected from GfK’s web-enabled KnowledgePanel® which closely resembles the U.S. population. The sample was subsequently weighted to reflect population figures from the U.S. Census Bureau.

The completion rate was 73% among panel members contacted to participate. The margin of error is ±1 to 2 percentage points for all outcomes included in this report.