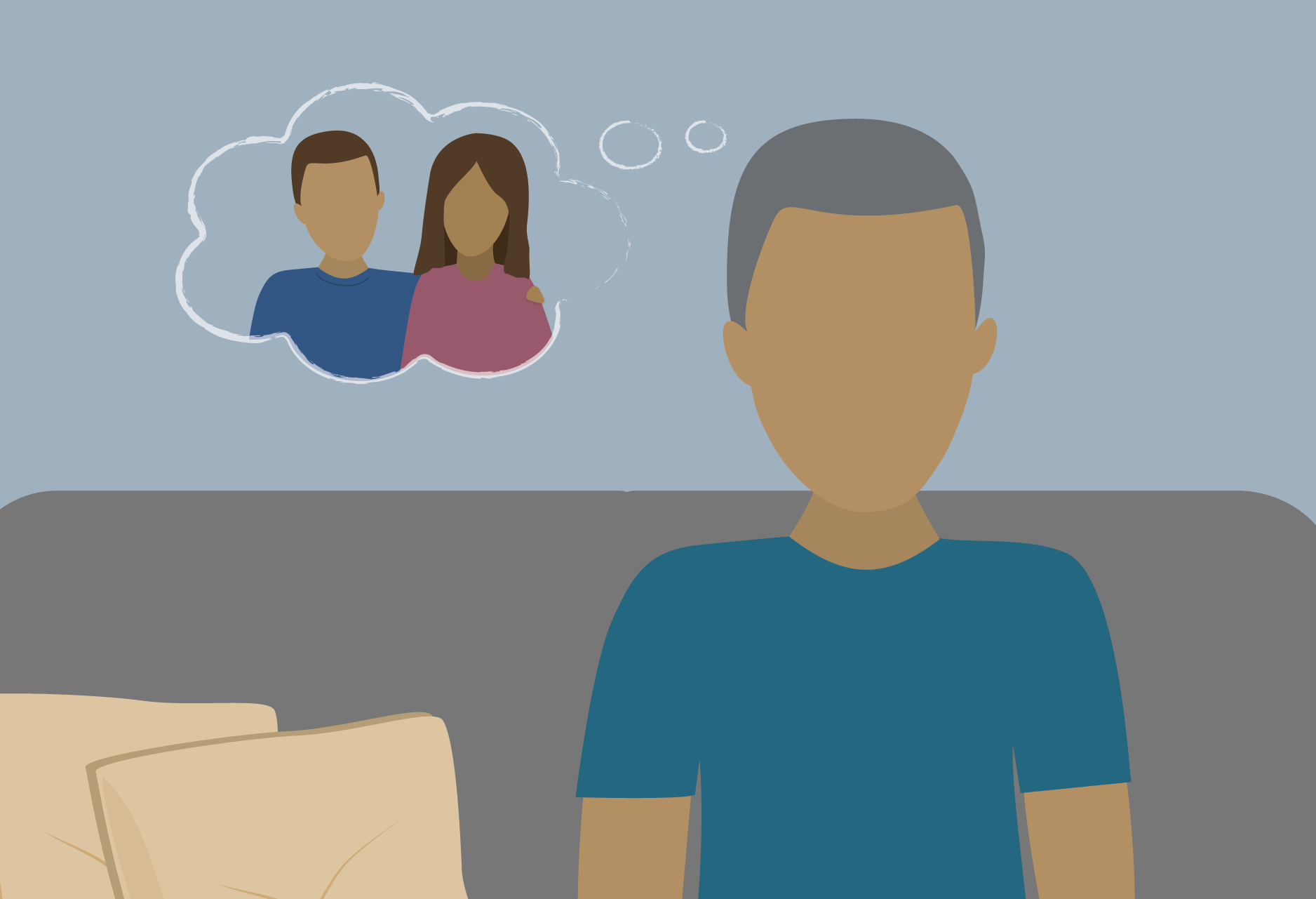 The University of Michigan National Poll on Healthy Aging (NPHA) asked a national sample of U.S. adults age 50–80 about lack of companionship and isolation (loneliness), social interactions, and health behaviors in June 2020. This was a follow-up to a similar NPHA survey conducted in October 2018 among a different national sample. The comparisons that follow show a substantial increase in loneliness among older adults from before the COVID-19 pandemic to the period March–June 2020.

There were fewer notable differences among respondents in feelings of isolation from March–June 2020. Women were more likely to report feeling isolated (61% vs. 50% of men), as were people in fair or poor mental health (72% vs. 55% of those reporting excellent, very good, or good mental health), and people reporting more symptoms of depression (89% vs. 52% among those with fewer symptoms).

Infrequent social contact (once a week or less) with people outside of the household was more common among individuals age 50–64 (49% vs. 42% of those 65–80), men (52% vs. 41% of women), and those who lived with others (48% vs. 41% of those living alone). Infrequent social contact was also more common for those reporting fair or poor physical health (53% vs. 45% of those with better physical health), fair or poor mental health (58% vs. 45% of those with better mental health), and individuals with more depressive symptoms (64% vs. 44% of those with fewer symptoms). 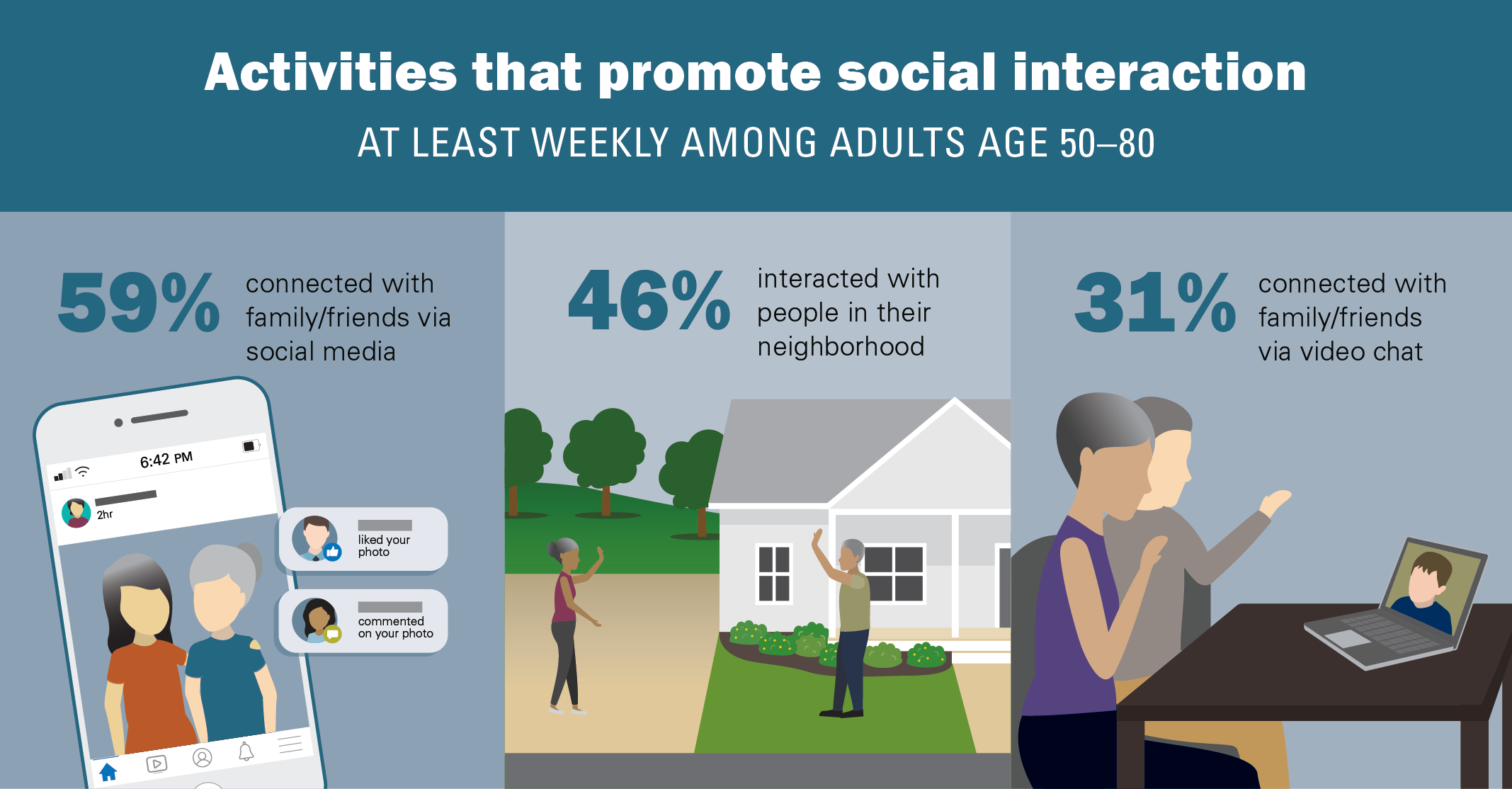 In 2018 and 2020, most older adults indicated they engaged in healthy behaviors several times a week. Four out of five reported getting enough sleep (80% in 2018 vs. 81% in 2020) and eating a healthy diet (80% in 2018 and 2020), and in both surveys, 62% said they exercised at least several times per week. In both survey years, people who regularly engaged in healthy behaviors were generally less likely to experience loneliness compared to those who did not.

The results of this poll suggest that the COVID-19 pandemic has had a substantial impact on feelings of loneliness (lack of companionship and isolation) and social connections among older adults. A greater proportion of adults age 50–80 felt a lack of companionship, felt socially isolated, and had infrequent contact with others from outside their home during the early months of the pandemic than in 2018 when those numbers were already worrisomely high.

Studies show that chronic loneliness can adversely affect memory, mental and physical health, and longevity. This poll found that loneliness and limited social contact during the pandemic were strongly associated with depressive symptoms and overall mental health among older adults. In addition, these results suggest that those who engage in healthy behaviors less frequently experience more loneliness than those who do things like get regular exercise and enough sleep.

It is important to recognize the pandemic’s impacts on the overall well-being of older adults and identify opportunities to mitigate them. The increases in loneliness and infrequent social contact may be at least partially explained by the important public health strategies used to reduce the spread of COVID-19 (e.g., stay-at-home orders). Yet even during these challenging times, increased efforts should be made to identify older adults at higher risk of feeling lonely, isolated, or socially disconnected from others, including those living alone and those with fair or poor mental and/or physical health.

These results suggest that the use of video chat and social media, while helpful for some, may not buffer feelings of loneliness for many older adults. On the other hand, those who interacted with others in their neighborhood and/or with nature experienced less loneliness. While personal interactions and social activities may look different during the COVID-19 pandemic (e.g., physically distanced, outdoors, or online), providing safe opportunities for regular and meaningful interaction with others and with nature is important to reduce loneliness and maintain social connections.

As the COVID-19 pandemic continues, it is critical for policymakers, clinicians, and family members to address feelings of loneliness among older adults to mitigate their effects on mental and physical health.