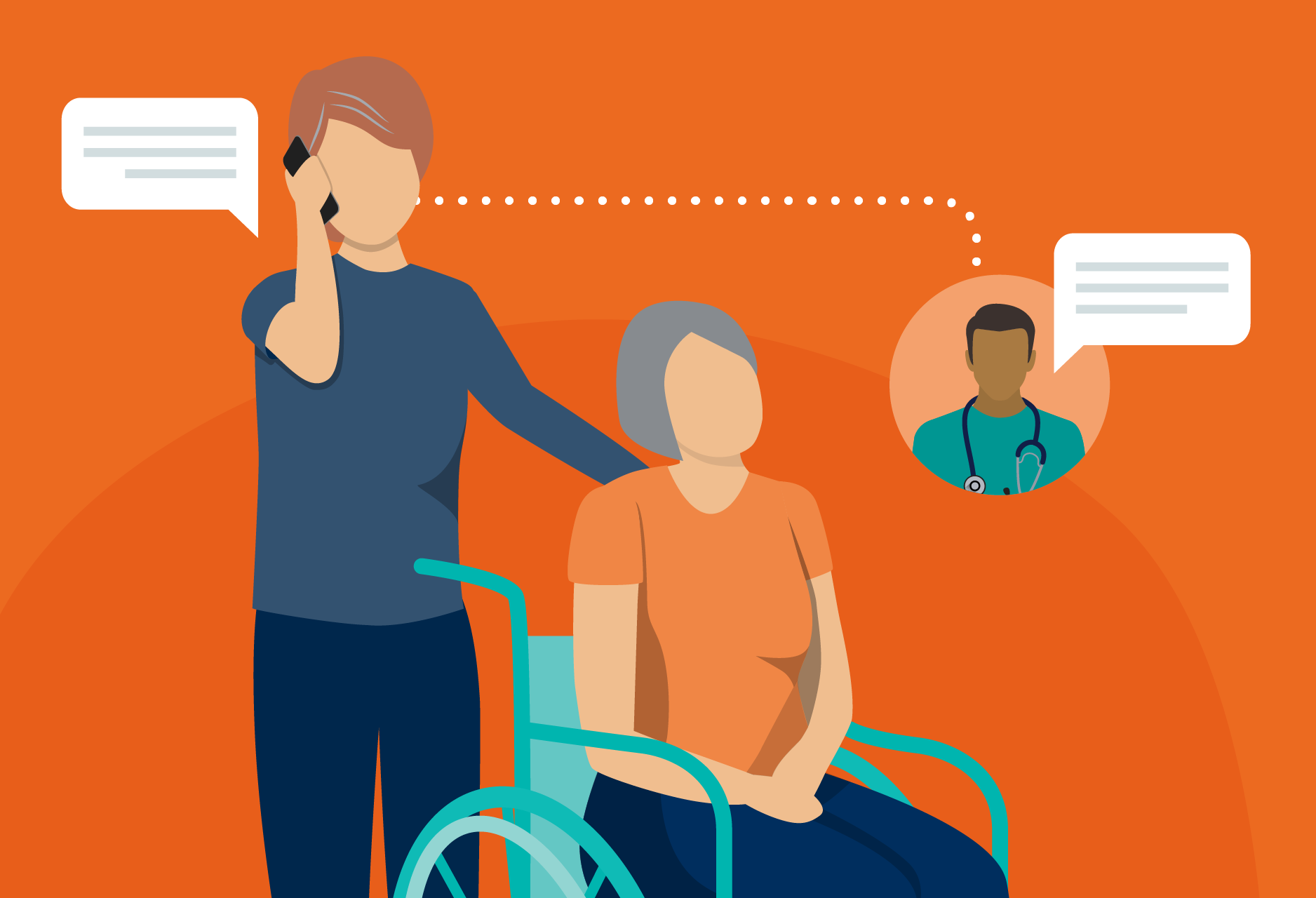 People age 50 and above commonly provide health, personal, and other types of care and support to other older adults living with chronic conditions or disabilities. This support is often essential for aging in place and managing chronic conditions. In July 2022, the University of Michigan National Poll on Healthy Aging asked a national sample of U.S. adults age 50–80 about their experiences helping an adult age 65 or older with health, personal, and other types of care needs.

More than half of adults age 50–80 (54%) said they have helped an adult age 65 or older with health, personal, or other care tasks in the past two years. The most common care tasks included helping with health care encounters (e.g., making or attending appointments, communicating with providers) (33%), home maintenance or improvement (e.g., cleaning or yard work) (32%), meals (including shopping or meal preparation) (31%), and finances (e.g., paying bills or banking) (22%). About one in six adults age 50–80 helped with personal care tasks (e.g., dressing or bathing) (16%), medical care tasks (e.g., managing medications) (15%), coordinating care (15%), and health insurance (e.g., selecting coverage or understanding benefits) (15%). About half of respondents who provided help assisted with one or two care tasks (46%), 25% helped with three or four, and 29% helped with five or more care tasks. Those who were married or partnered were more likely to provide care than those who were not (57% vs. 50%), as were those with a college degree compared to those without (61% vs. 50%).

Among those who helped an older adult, direct communication with health care providers happened most often in-person (68%), followed by phone (39%), online patient portal (12%), email or mail (12%), and virtual visit (9%).

Nearly all helpers (94%) said they were not paid for the help provided, while 6% reported being paid.

More than three in five of those who helped an older adult with tasks reported currently providing help (62%), while 38% provided help previously. Almost half (47%) had provided help for at least three years, with one in three (33%) helping for five years or longer. Most helpers (72%) did not live with the person they were assisting. The person who received help was most often a parent/parent-in-law (45%), followed by a friend or neighbor (19%), spouse or partner (17%), or other family member (15%). One in four who provided help (28%) said the person they helped had mild cognitive impairment or Alzheimer’s disease/other dementia.

For those who helped an older adult with one or more specific care tasks, most felt very confident in their ability to help with meals (81%), finances (76%), health care (74%), home maintenance or improvement (69%), and health insurance (65%). A smaller majority felt very confident helping with medical care (61%), personal care (53%), and coordinating services (53%).

Two in three adults age 50–80 who helped (65%) reported at least one challenge with providing assistance, including emotional or physical fatigue (34%), balancing work or other responsibilities (31%), lack of time for self-care (22%), balancing time with family/friends (21%), and a lack of help or support from family/friends (19%). Less commonly reported challenges were navigating care options or decisions (18%), a lack of knowledge or training in providing help (15%), a lack of appreciation from the person receiving help (14%), and financial problems (13%).

Nearly all helpers (96%) reported positive aspects of providing help, including feeling appreciated (52%), a sense of purpose (45%), growing closer to family and/or friends (35%), and getting more familiar with community resources (29%). Those who helped older adults also reported becoming more aware of their own future health and personal care needs (59%), more motivated to focus on their own health (37%), and more motivated to prepare a will, trust, and/or advanced directives (31%). 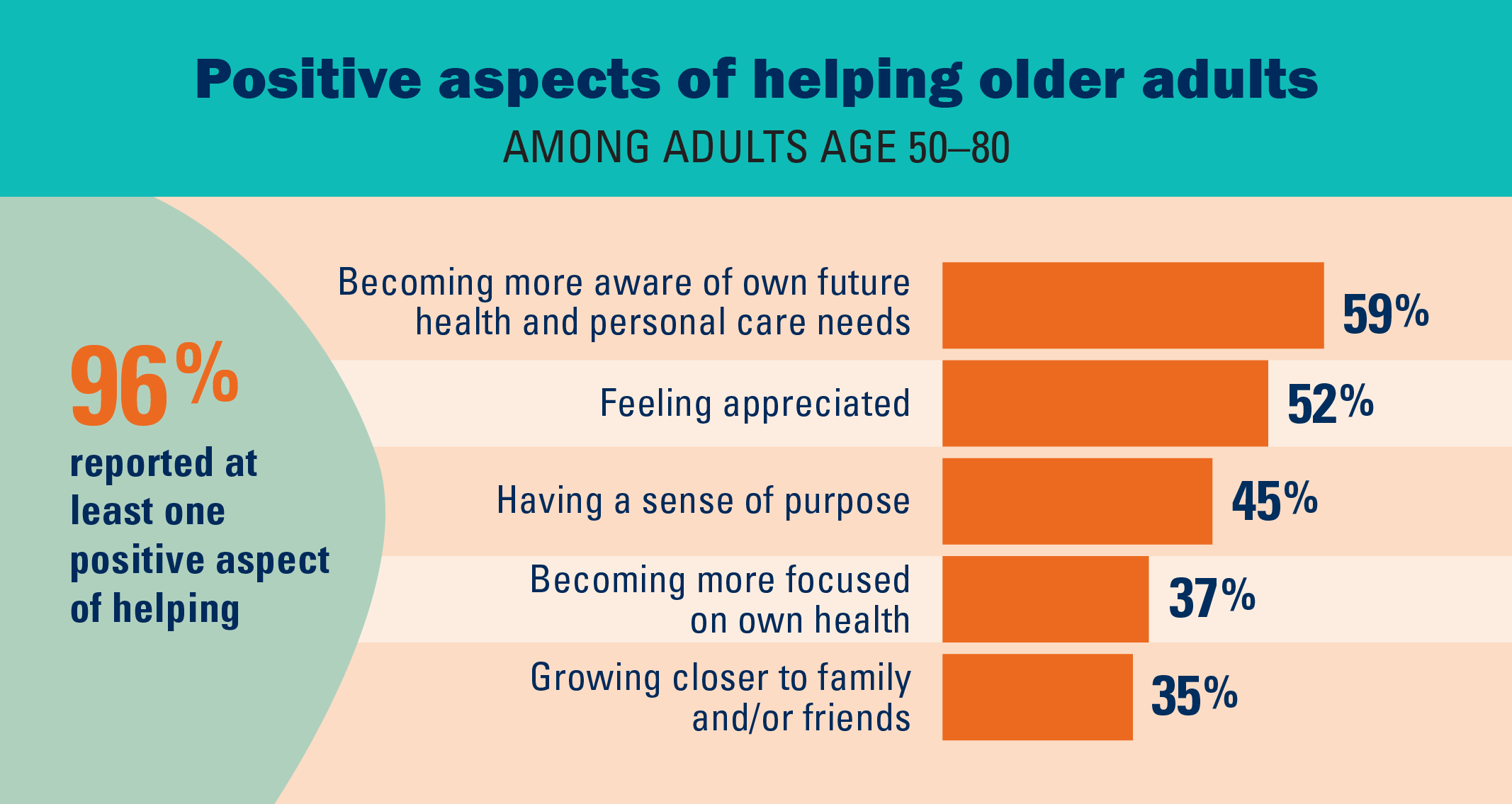 Many older adults benefit from and rely on the support of family or friends to provide, navigate, or make decisions about health and personal care. In this poll, over half of adults age 50–80 reported providing help to an adult age 65 or older in the past two years, with two in five of them helping more than one person.

It is important to recognize and support the variety of ways that adults age 50 and older help other older adults in their lives, as well as the diversity of support situations. Some who help an older adult may identify as a regular caregiver, whereas others may consider themselves an occasional helper. While most who received help were parents/parents-in-law or spouses/partners, nearly one in five were neighbors or friends. Moreover, most helpers did not live with the person they were helping, so it is important to recognize the needs of those providing care and/or support from a distance.

These poll results also demonstrate that providing support to older adults often spans multiple years. Health, personal, and other care needs can change over time which can result in new or additional responsibilities for helpers. Notably, one in four helpers age 50–80 supported an older adult with mild cognitive impairment or Alzheimer’s disease/other dementia which often involve distinct medical and social needs. Nearly half of those helping with five or more care tasks and over half helping a person with mild cognitive impairment or Alzheimer’s disease/other dementia found care tasks more difficult than expected.

Although most helpers were very confident in their ability to do their tasks, some felt less confident. The findings signal the importance of preparing and providing support to people who serve as helpers for older adults as some may require additional support themselves, especially in situations where care needs are substantial. Medical and personal care tasks can be complex, physically challenging, and stressful. Similarly, coordinating care can be complicated and time-consuming. Interventions and programs—including proactive strategies such as education, training, and support planning tailored to the needs of helpers who lack confidence and resources for providing this type of care—may help alleviate these difficulties.

Those providing help commonly encountered emotional or physical fatigue as well as difficulty balancing other responsibilities, time with family and friends, and self-care. Yet, the vast majority also reported positive aspects of providing help, with many noting that helping another older adult made them more focused on their own health and future care needs. Recognizing and supporting these helpers may mitigate the challenges they face while promoting the positive aspects of this important role.

This National Poll on Healthy Aging report presents findings from a nationally representative household survey conducted exclusively by NORC at the University of Chicago for the University of Michigan’s Institute for Healthcare Policy and Innovation. National Poll on Healthy Aging surveys are conducted using NORC’s AmeriSpeak probability-based panel. This survey module was administered online and via phone in July 2022 to a randomly selected, stratified group of U.S. adults age 50–80 (n=2,163). The sample was subsequently weighted to reflect population figures from the U.S. Census Bureau. The completion rate was 75% among panel members contacted to participate. The margin of error is ±2 to 3 percentage points for questions asked of the full sample and higher among subgroups.