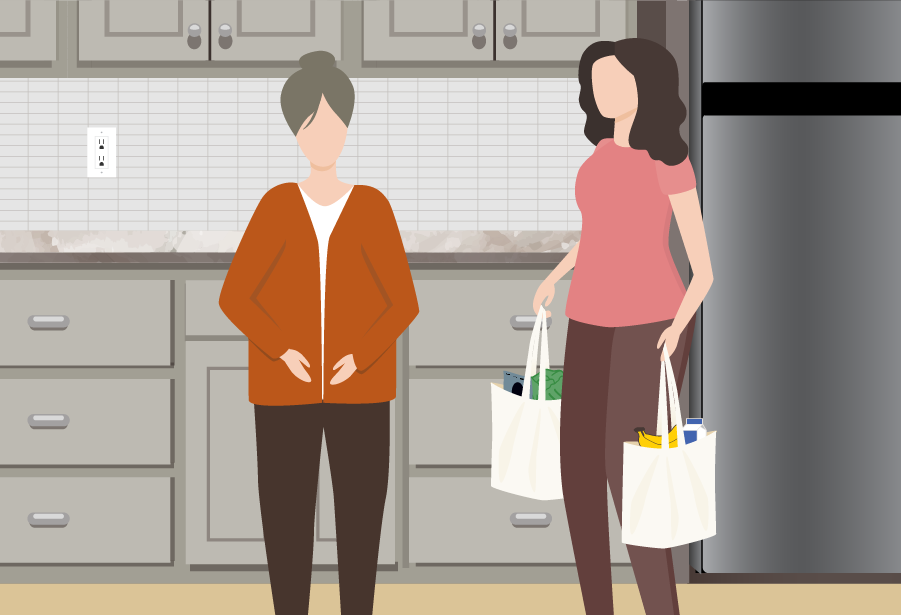 “Aging in place” refers to living independently,  safely, and comfortably in one’s home for as long as possible, and it’s an important goal for many older adults and their families. Without home modifications and additional support from others, however, unexpected medical events and declines in health can make it challenging to remain in one’s home. Over January and February 2022, the University of Michigan National Poll on Healthy Aging asked a national sample of adults age 50–80 about their perspectives on aging in place, their homes, and available social supports.

About one in five older adults (21%) had moved in  the past five years; of those, 52% moved to a home that was easier to get around, 49% moved to a smaller home, 34% moved closer to relatives, and 11% moved in with relatives or had relatives move in with them.

The most common accessibility features older adults reported having in their home were a main floor bathroom (88%) and bedroom (78%). About half (54%) had door frames in their homes wide enough for a wheelchair to pass through, 32% had lever-style door handles, and 19% had home entrances with ramps or no stairs. Bathroom features included shower chairs or benches (36%), raised-height toilet seats (36%), or grab bars (32%), while 7% reported having barrier-free showers.

Hoarding or excess clutter within homes can present a safety hazard and hinder accessibility. About one in ten older adults (9%) reported that it was difficult to use the main rooms in their home due to clutter or their number of possessions.

More than one in four older adults (28%) reported living alone. Among all older adults, nearly three in five (58%) said they were very satisfied with their relationships with those close to them. When asked about social interactions over the past year, 77% had contact at least once a week with friends, family, or neighbors who did not live with them. People who reported having a disability, impairment, or chronic health condition that limits activities were less likely than people without disabilities to have contact with others outside their household at least once a week (68% vs. 80%) and were less likely to be very satisfied with their current social life (22% vs. 39%).

Two in five older adults (40%) did not know of places or organizations in their community that are welcoming for people their age to socialize, exercise, or participate in activities. Those age 50–64 were less likely to know of these community organizations than those age 65–80, as were older adults who live in rural areas compared with those who live in urban areas.

The majority of older adults said they have someone in their life who could help with grocery shopping (84%), household chores (80%) and managing their finances (79%) and two in three (67%) said they had someone who could help with personal care. Those who live alone were more likely to say that do not have someone to help with personal care compared with those who live with someone (48% vs. 27%).

About one in five adults age 50–80 (19%) said they were very confident they could afford to pay for help with household chores, grocery shopping, personal care, and managing finances, 38% were somewhat confident, 27% were not very confident, and 16% were not at all confident. Adults age 65–80 were more confident (very or somewhat) about their ability to afford these services compared with those age 50–64 (62% vs. 53%). More than three in five older adults who reported fair or poor mental or physical health said they were not very or not at all confident that they could afford to pay for help.

The findings from this poll suggest that while most older adults feel it is very important for them to stay in their home as long as possible, many are not prepared to age in place. While about four in five older adults think their homes either definitely or probably have the features for them to be able to age in place, many reported their homes did not have common accessibility features, and nearly half reported they had given very little, if any, consideration to what home modifications would be needed. About half of older adults reported having at least one smart home device, which can help simplify tasks or allow family members and friends to provide support from a distance.

Though future disability needs may be unpredictable, successfully aging in place typically requires adequate social support in addition to having a home that is accessible. While some older adults have strong social connections within their family and community, others are more isolated and do not have people in their life they can rely on for help with personal care, household chores, grocery shopping, or managing finances, particularly those who live alone. Moreover, more than two in five older adults are not confident that they could afford to pay for additional help they might need.

A variety of community-based programs offer supportive services for older adults and people with disabilities, some of which may be low cost, covered by insurance, or available on a sliding scale basis. Organizations such as local Area Agencies on Aging can help connect older adults with programs and services that best suit their needs and facilitate aging in place. Family members and friends can be vital in helping older adults engage with these services. It is important to improve awareness of these services among older adults and their families and for these services to expand to meet the needs of a growing population.

This National Poll on Healthy Aging report presents findings from a nationally representative household survey conducted exclusively by NORC at the University of Chicago for the University of Michigan’s Institute for Healthcare Policy and Innovation.

National Poll on Healthy Aging surveys are conducted using NORC’s AmeriSpeak probability-based panel. This survey module was administered online and via phone in January and February 2022 to a randomly selected, stratified group of U.S. adults age 50–80 (n=2,277). The sample was subsequently weighted to reflect population figures from the U.S. Census Bureau. The completion rate was 68% among panel members contacted to participate. The margin of error is ±1 to 3 percentage points for questions asked of the full sample and higher among subgroups.