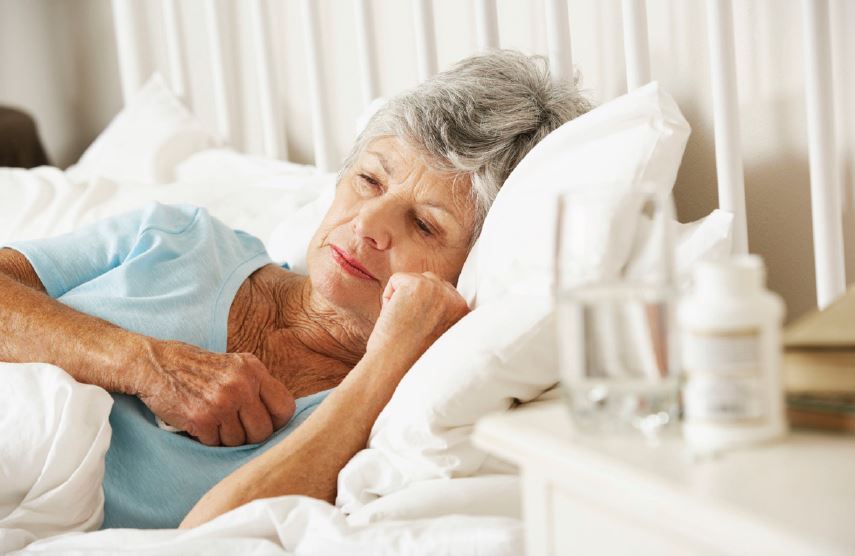 Good sleep can help maintain optimal health, but for many older adults getting enough restful sleep can be a challenge. Poor sleep has been linked to depression, memory difficulties, and an increased risk of falls and accidents. The University of Michigan National Poll on Healthy Aging asked a national sample of adults age 65–80 about their sleep patterns, use of sleep medications, and whether they discussed sleep-related concerns with their doctor.

Having to use the bathroom (50%), worry/stress (25%), and pain (23%) were among the common reasons cited for trouble sleeping. But 41% said they were not sure why that had trouble sleeping.

Among older adults having trouble falling asleep on three or more nights a week, 60% used some type of medication to help with sleep either regularly (31%) or on occasion (29%).

Use of Medications to Help with Sleep

Prescription sleep medication - 5% of older adults reported regular use of these medications and another 3% had occasional use.

Prescription pain medications - 5% of older adults reported either regular or occasional use of these medications to help with sleep.

OTC medications - 5% indicated regular use and 17% reported occasional use.

Herbal/natural sleep aids - 4% had regular use of these aids, another 8% said they used these aids occasionally.

Among older adults having trouble falling asleep on 3 or more nights a week, regular use of medication to help with sleep was higher; 17% used prescription sleep medicines, 5% prescription pain medication, 13% OTC medicines, and 7% herbal/natural aids regularly.

Among older adults taking prescription sleep medications, the majority (62%) reported long-term use of more than 3 years.

Is Sleep a Health Problem?

Among older adults reporting trouble falling asleep on three or more nights a week, 65% said that poor sleep is a normal part of aging and 40% described their health as fair or poor.

Talking to a Doctor About Sleep

For older adults who did talk about sleep, 62% said the doctor provided helpful advice, another 31% got advice that was not helpful, and 7% said their doctor did not give any advice.

Why haven’t older adults discussed ways to improve sleep with their doctor? The most common reasons cited were not thinking of sleep as a health issue (34%), having other concerns to discuss (31%), not remembering to ask (21%), and not thinking the doctor could help (17%).

Although sleep patterns can change with age (e.g., going to bed earlier, waking up earlier), poor sleep is not a normal part of aging. Poor sleep can negatively affect overall health and quality of life. At times, sleep problems may signal a more serious health issue.

More than half of respondents to this National Poll on Healthy Aging believed that poor sleep is a normal part of aging. This is reflected in the small proportion of older adults who reported talking to their doctors about how to improve their sleep. In fact, the most common reason cited for not discussing these concerns was not thinking of sleep as a health issue.

Research has shown that extended use of medications for sleep (either prescription or OTC) can be detrimental to health. Among other adverse effects, long-term use of these medications can impair memory and increase the risk of falls.

A similar number of older adults reported use of prescription pain medications to help with sleep. This is notable at a time when the general topic of opioid misuse is receiving increased attention. This presents an opportunity for doctors and pharmacists to educate patients about these medications and explore new ways to reduce prolonged use and potential dangers.

Poll results also show nearly one in four older adults use OTC sleep medications either regularly or on occasion. Like prescription medications, OTC drugs can have serious side effects that present health and safety concerns. These medications usually contain antihistamines like diphenhydramine. Besides confusion, other common side effects include urinary retention and constipation.

There is a false perception among many people that medications available without a prescription must be safe. Although educational campaigns directed toward older adults have helped raise awareness of these safety concerns, the current results suggest there is still substantial OTC use and thus potential for serious adverse effects.

In addition, use of herbal/natural sleep aids was reported by one in eight older adults. Herbal sleep aids are often assumed to be safe because they are made with natural ingredients, but drug interactions and side effects can occur with these products.

Sleep is an important health issue and older adults are encouraged to talk to their doctors about sleep-related concerns. When poll respondents spoke to their doctor, they usually received helpful advice. General advice may include limiting fluids and electronic media before bedtime. Relaxation methods and interventions to address stress and anxiety are sometimes recommended as well.

Doctors should also remember to ask older adults about sleep-related concerns and about use of medications to help with sleep.

This survey was administered online in April 2017 to a randomly selected, stratified group of older adults age 50–80 (n=2,131). Respondents were selected from GfK’s web-enabled KnowledgePanel® that closely resembles the U.S. population. The sample was subsequently weighted to reflect population figures from the Census Bureau.

This report is based on responses from 1,065 respondents age 65–80. The completion rate was 80% among panel members contacted to participate. The margin of error is ±1 to 3 percentage points and higher among subgroups.