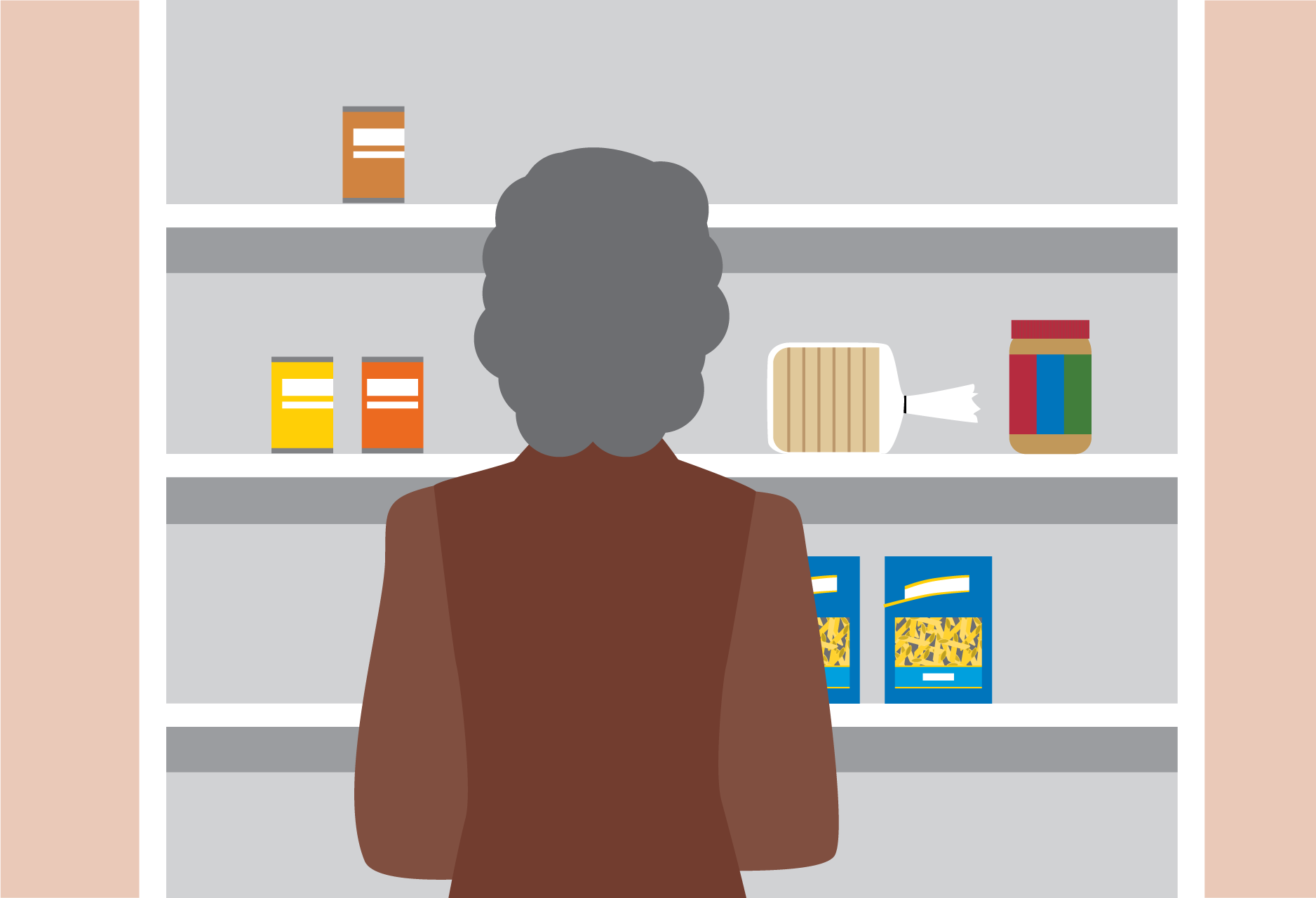 Food insecurity, defined as difficulty in acquiring or accessing food due to a lack of money, affected one in nine of all U.S. households in 2018. Although trends in food insecurity are tracked through surveys of the general U.S. population, few surveys specifically focus on food insecurity among older adults. In December 2019 (prior to the COVID-19 pandemic), the University of Michigan National Poll on Healthy Aging surveyed a national sample of U.S. adults age 50–80 about household food insecurity and participation in food assistance programs.

Use of supplemental food and meal programs

During the past year, one in ten respondents age 50–80 (10%) reported receiving Supplemental Nutrition Assistance Program (SNAP) benefits (formerly known as food stamps), which provide a monthly supplement for purchasing nutritious food. One in three older adults experiencing food insecurity received SNAP benefits (32%) compared to 6% of older adults who were food secure. Receiving SNAP benefits was higher among non-Hispanic Black adults (21%) and Hispanic adults (15%) compared to non-Hispanic White adults (7%), and higher among adults with a high school education or less (17%) compared to adults with some college (9%) or a bachelor’s degree or higher (2%). Receiving SNAP benefits was highest among those with household incomes less than $30,000 (34%) compared to those with household incomes from $30,000 to less than $60,000 (8%) and incomes of $60,000 or more (3%).

Adults aged 60 and older are eligible to receive home-delivered or congregate meals (e.g. meals delivered in community or group settings) through the Older Americans Act (OAA). Yet among adults 60 and older, only 2% reported participating in meal programs through a community or senior center, and 1% received meals delivered to their home from a program like Meals on Wheels in the past year.

Only 10% of older adults reported receiving SNAP benefits and very few received congregate or home-delivered meals. This suggests that some older adults experiencing food insecurity are not benefitting from programs designed to support them. Barriers to participating in SNAP or other community programs can include lack of knowledge or misinformation about services or eligibility, complex application procedures, waitlists, inadequate transportation, stigma, and other factors.

Improved communication about the benefits of participating in SNAP and community meal programs, as well as increased screening in clinical settings and referrals to community resources, may help to improve participation rates in nutrition programs and help alleviate food insecurity among older adults. These efforts are critically important as the COVID-19 pandemic has exacerbated existing financial and logistical challenges in accessing sufficient and healthy foods, making these programs essential for alleviating food insecurity, particularly among older adults.

This survey was administered online in December 2019 to a randomly selected, stratified group of older adults age 50–80 (n=2,048). Respondents were selected from the Ipsos web-enabled KnowledgePanel®, which closely resembles the U.S. population. The sample was subsequently weighted to reflect population figures from the U.S. Census Bureau.

The completion rate was 77% among panel members contacted to participate. The margin of error is ±1 to 2 percentage points for questions asked of the full sample, and higher among subgroups.