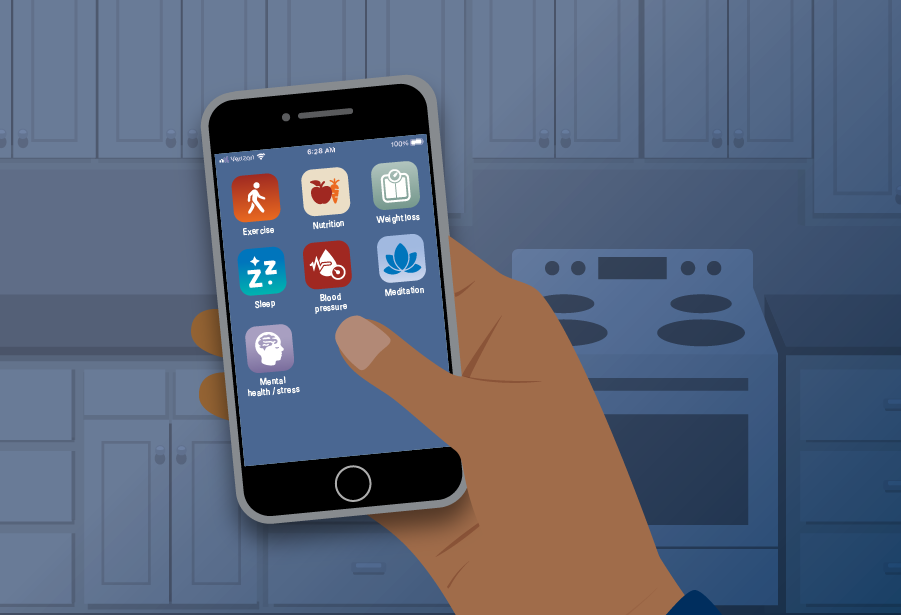 Mobile health apps allow users to learn more about their health, monitor health behaviors, and receive personalized support through a smartphone or tablet. More than 350,000 mobile health apps are currently available. Many of these apps focus on managing chronic conditions such as type 2 diabetes, and many also connect to other monitoring technologies such as continuous glucose monitors (CGMs). In August 2021, the University of Michigan National Poll on Healthy Aging asked a national sample of adults age 50–80 about their use of and interest in mobile health apps, including those for type 2 diabetes.

Use of mobile health apps

Among those who have ever used a health app, one in four have used these apps to share health information with their health care providers. Seven in ten (70%) reported using them to keep track of their health, 39% to get information about health, and 9% to share or compete with family/friends.

Among those who do not currently use health apps, about half (51%) said it was because of a lack of interest. Others said they never thought about using health apps (32%), were unsure whether health apps could help them (20%), or that they were uncomfortable with technology (14%).

Type 2 diabetes and health app use

About one in six older adults (17%) reported having type 2 diabetes. Of these, 39% said they have ever used a mobile health app. Among health app users with type 2 diabetes, 28% reported using a health app to track their blood sugar, while another 45% expressed interest in using an app for this purpose. In addition, 14% said they track their diabetes medication use with an app, and another 45% had interest in doing so.

Among those with diabetes who were not using a CGM, 56% said they were interested in using one.

Nearly three in ten adults age 50–80 currently use one or more mobile health apps, most commonly to track their physical activity, nutrition, weight loss, or sleep. About one in four health app users have shared information from their app with a health care provider. Sharing data from health apps is a potential opportunity for health care providers to help patients set and attain health goals.

While health apps have been promoted to help manage many chronic medical conditions, this poll indicates that a minority of older adults with type 2 diabetes are using a health app to help manage their diabetes, and even fewer are using a CGM. It is possible that more people could benefit from using a CGM, and the poll found that more than half of older adults who were not using a CGM would be interested in trying one. Clinicians should discuss CGMs with their patients with diabetes to determine whether these tools could be helpful to them.

While some people may not be interested in mobile technology or may find it challenging to use, for many older adults health apps offer an opportunity to support positive behaviors and may contribute to improved health outcomes.

This National Poll on Healthy Aging report presents findings from a nationally representative household survey conducted exclusively by NORC at the University of Chicago for the University of Michigan’s Institute for Healthcare Policy and Innovation. National Poll on Healthy Aging surveys are conducted using NORC’s AmeriSpeak probability-based panel. This survey module was administered online and via phone in August 2021 to a randomly selected, stratified group of U.S. adults age 50–80 (n=2,110). The sample was subsequently weighted to reflect population figures from the U.S. Census Bureau. The completion rate was 64% among panel members contacted to participate. The margin of error is ±2 to 3 percentage points for questions asked of the full sample and higher among subgroups.