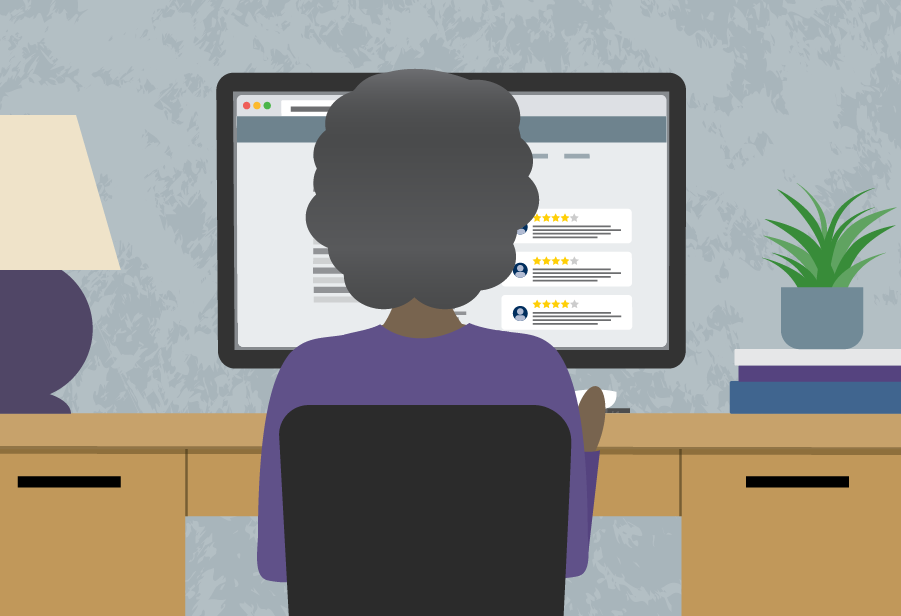 Ratings and reviews for nearly everything can be found online these days, including doctors. How are older adults using these ratings in their decisions about choosing doctors? In May 2019, the University of Michigan National Poll on Healthy Aging asked a national sample of adults age 50–80 about their use and perceptions of online doctor ratings.

Use of Online Doctor Ratings

Seven in ten respondents (71%) reported that they would select a doctor with many positive ratings, even if he or she had a few negative reviews. A similar percentage (69%) said that they would avoid selecting a doctor with mostly negative ratings even if that individual had a few very positive ratings. Two in five (41%) felt that the total number of reviews was important when selecting a doctor.

Also, for those who looked up ratings more than once in the past year, 67% had chosen a doctor due to good online ratings/reviews, and nearly all (96%) thought that the ratings matched their experience after meeting with the doctor. Among this group of more frequent users, more than half (57%) reported not choosing a doctor due to poor ratings.

In choosing a doctor, one in five adults age 50–80 (20%) thought that online doctor ratings were very important. More important to the respondents, however, was how long it takes to get an appointment (61%), the doctor’s years of experience (42%), and a recommendation from another doctor (40%). Word of mouth information from family/friends was important to 23%, and the ability to interact with their doctor online for tasks such as emailing, refilling prescriptions and scheduling was very important to 21%.

Only 7% of respondents had ever posted an online rating or review of a doctor. Over half (56%) of those who left a rating did so to praise a good experience, but one in three (35%) did so to criticize a bad experience. Of those who provided ratings, 17% did so because they were encouraged by office staff, and 8% left one because of encouragement from their doctor. About half of all respondents (53%) felt that some doctors influence their ratings to make themselves look good.

While some may think that choosing a doctor using online ratings is something only younger people may do, this national poll shows that this practice is also common among older adults. About half of respondents were aware that other resources, such as state medical boards, exist but few had sought out those resources. Increasing awareness of online ratings among older adults could prove to be valuable for those interested in learning more about a doctor. Yet some online rating systems are still at risk of being “gamed,” including by the doctors and office staff themselves.

Though many older adults have viewed online ratings, the poll results highlight some potential limitations. Few respondents had ever left a rating, which suggests that the ratings may not be broadly representative of the overall population. While many doctors have ratings from only a small number of patients, for most people the overall number of ratings was not an important factor in choosing a doctor. About half of all participants felt that some doctors may influence their ratings to make themselves look better. Despite these concerns about representativeness and bias, almost all respondents who met a doctor after reading his or her online ratings felt that the ratings had been accurate.

Ratings are important to some people, but are by no means the most important factor for choosing a doctor: appointment availability, physician credentials, and recommendations from other providers or family members were all more important factors for older adults.

Finding a new doctor can be challenging and stressful. Online doctor ratings and reviews represent a potentially useful resource for older adults and are likely to continue to increase in use over time.